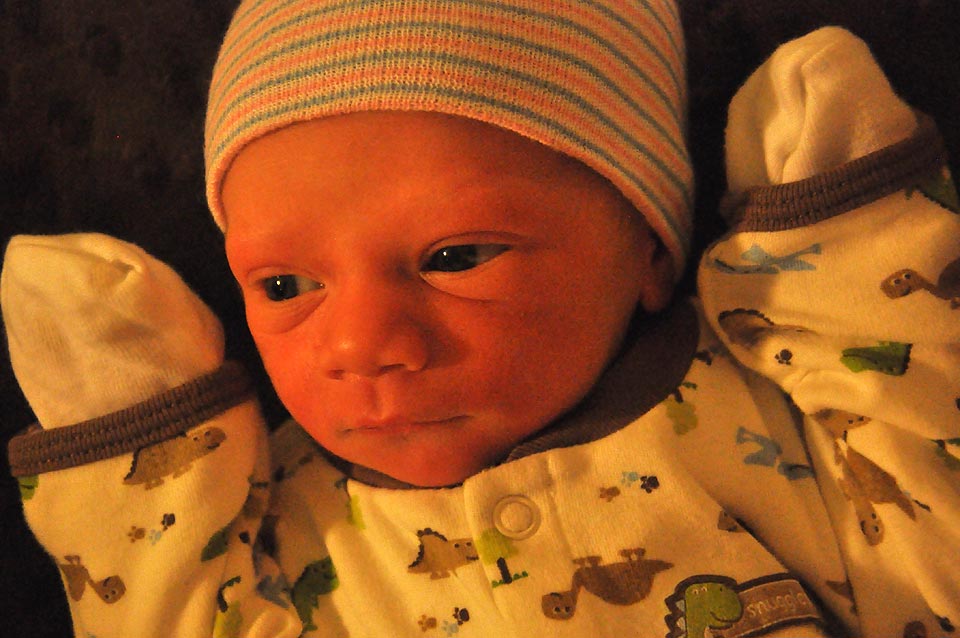 Disclaimer: Read at your own risk! This is a true story of giving birth.

Andrew Bauer Gammon arrived 11:21pm on November 10th weighing 7lbs, 6 oz and measured 23 inches long. He was born at 42 weeks and by judging his size, that was when he was supposed to come. Many of you know that I was so frustrated by the end and ready to have him. I know now that if he was born earlier it’s possible that his lungs wouldn’t have been ready to function. There is a group on Facebook called “An EDD (estimated due date) is not an Expiration Date”. This is so true!!! How many times do we hear of women being induced on or before their due date when no medical intervention is necessary? I know now what patience means. I was one of those women who was ready early on to have my baby. However, I’m so happy now that Andrew came two weeks late.

I will be honest and tell you that at 39 weeks I started working on my pressure points to try to induce myself. I tried acupuncture three times, eating eggplant, walking, bumpy car rides and Clary sage oil. I feel like I tried everything you can imagine to try to have him early. What did I learn from all this? That a baby isn’t going to come unless he is ready!

I had some pretty painful contractions starting at 36 weeks, which made me think that Andrew would come early. Because of these contractions,we had our bags packed and were ready to go early on. At my 41 week appointment we decided that it was safe to go ahead and strip my membranes, hoping that it would bring on labor (Thursday, Nov 4th). Besides having some cramping, nothing else happened. Sunday morning (Nov 7)  I lost my mucus plug, so I was super excited about that. We knew that labor would probably start within 48 hours of losing my plug. By Monday morning nothing was happening, so I went for my third acupuncture treatment, followed by a trip to the birth center to have my membranes stripped again and to get homeopathics  (black and blue cohosh) . I started taking those every hour. Tuesday came without anything happening. I think I cried all day because I was so frustrated. I took the homeopathics every 30 minutes.

Finally, Wednesday at 1:30 am I woke up with contractions. They went on until 3:30 am and were time-able….every 12 min for about 1 min. I was excited and made a sandwich because I didn’t know how quickly they would intensify and I knew that I would need all the nutrients I can get. Since I changed positions and was moving around, my contractions pretty much stopped.  From 3:30-7am I had a few contractions here or there. I spoke with my midwife  at 7am and started taking the homeopathics every 15 min and started nipple stimulation. This definitely helped start the contractions again. I did nipple stimulation for 4 hours only taking a 5 min break after each contraction (this was not fun, by the way). My contractions were so intense that I ended up throwing up all day. I’m a pretty tough cookie and can handle quite a lot of pain. This was pretty intense though!

I think by 1:30 or 2 one of the midwives came over to our house to check on us and to strip my membranes. After she left my contractions seemed to slow down a little and I started nipple stimulation again. After I started the nipple stimulation my contractions went from 10 min to 5 min apart with some that were 3-4 min. apart. When they were that close together, we decided to leave for the birth center (I think we got there around 5). I have to say that that was the most uncomfortable car ride I’ve ever had in my life. I sat in the front passenger seat and held on to the door handle. I could only imagine what people must have been thinking if they looked over and saw the expressions on my face. It was a 40 minute car ride to Spartanburg during rush hour. I was throwing up in the car (thank goodness we brought a trash can) and was  just praying that we would get there soon.

When we arrived at the birth center I was almost 5 cm dilated. I got in the birthing tub after having a few contractions on the bed. I really liked being in the tub and I think I was in there for a few hours. Justin had to hold a vomit bag for me the entire time. Linda put peppermint oil in it which really helped with the nausea. After pushing for a bit in the tub-Linda and Amy (the midwives) wanted me to lie on my back on the bed and push. I pushed for a bit and they saw that I had a cervical lip. After trying to push on the bed for a bit we tried the birth stool (my biceps hurt for more than a week from birth stool) After the birth stool I tried pushing on all fours on the bed. After pushing for a few hours , I was absolutely exhausted.  At some point during pushing, Andrew turned and ended up in a posterior position.

After all that pushing, the cervical lip not going away, we made a unanimous decision that it was time to go to the hospital. Amy called the hospital to let them know we were on our way and they sent an ambulance. When the EMT’s arrived they wanted me to get on the gurney and lie down. Well, I was on all fours on the bed and there was no way that I was turning! They were really great and let me get on the gurney on all fours and strapped me in.  Justin drove the car to the hospital and followed the ambulance, so he was able to see the EMT checking me. The whole time I was in the ambulance the EMT kept telling me not to push. Yeah, try not pushing when all your body wants to do is push!!! Well, I did push and I could hear her radioing in that she could see a head.  At this point I thought I was going to have him right there. We got to the hospital and the doctor wanted to take me in to do a c-section. Linda and the EMT kept telling him no, that I was already pushing his head out and that a c-section wasn’t necessary. He checked me and they took me to a delivery room. Keep in mind that I’m still on all fours on the gurney and have all these people around me. I had to take a little ride up in the elevator this way as well. In the delivery room  I had no choice but to turn over on to my back. I pushed for a little bit and nothing (as far as I could tell) was happening. The doctor told me he was going to do an episiotomy. So with the help from the episiotomy,  some light suctioning, pushing from me and looking up to see the pearly white gates of heaven open up, I was finally able to push Andrew out! RELIEF, JOY, GRATITUDE!!! Andrew was finally born and he was ok!!!

We stayed at the hospital for probably two more hours after he was born before we were released. We didn’t feel that we would be comfortable there, so we went back to the birth center to rest for a few hours before going home. Justin and I are so grateful for the two midwives, Linda and Amy and their apprentice Rhonda (from Labors of Love) for everything that they did for us. We had a really positive experience at the hospital as well and really happy with the treatment we received. Am I ready for another baby? I wouldn’t say so. I’m so grateful to hold my little baby and know that the next time might not be so traumatic. This is by far the hardest, most painful thing that I have ever had to go through. My husband was so supportive and I am grateful that he was by my side the entire time.  I know that it was difficult for him to see me in so much pain. You know what they say! “What doesn’t kill you makes you stronger”. I did at some point want to die, but I’m glad that nobody put me out of my misery. Motherhood has been wonderful and I wouldn’t trade it for anything else in the world.

I hope all is well in your world!